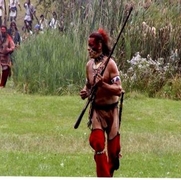 The one common link between the Native Americans, early settlers, and present day residents of Wilton is " Love of the Land ". As the Iriquois were attracted by the forests, streams, mineral waters, and good fertile land, so were the first pioneer families.

Trails used by trappers and traders crossed Wilton both North-South and East-West. In 1693 there was a three day battle near one of these crossings between British troops under Peter Schuyler and parties of French and Indians. The battle took place near Stiles corners. Neither side could claim victory, but the skirmish is known as the "Battle of Wilton". The site is noted by an historic marker at the corner of Parkhurst Road and Gailor Road.

The first settlers came to Wilton, or Palmertown as it was known earlier, between the French and Indian Wars and the Revolution. In 1764 the Brisbin brothers began a saw mill on the Snook Kill, which comes tumbling off the Palmertown Mountain Range in the North west section of Wilton. After the Revolution, the families of Stiles, Kings, Phillips, Laings, Perrys, Emersons, Dimmicks, Johnsons and McGregors left their marks as well as their names on many small hamlets such as: King's Station, Stiles corners, Dimmicks corners, Emersons corners and Mt. McGregor.

Emersons corners was named for Broadstreet Emerson who owned a Tavern c.1790 that was the first seat of Government in Wilton. The site is marked by an historic marker at the corner of Ballard and North Rds. In the late 1800's a bottling plant distributed the Gurn Spring Mineral Water and the area was then known as Gurn Spring. The Spring was closed in the early 1900's. The Gurn Spring Methodist Church c.1885, The South Wilton Church and the Wiltonville Church 1871 are still in existence, but no longer operate as Methodist churches. The combined congregations now occupy the Trinity Methodist on Ballard Road.

The McGregor brothers came from Scotland in 1787 and settled in an area near Palmertown. They began farming and operated a gristmill soon after they arrived. Duncan McGregor built a small hotel atop a mountain which became known as Mt. McGregor. The Hotel Balmoral, a grand luxury hotel, was built on the mountain in 1883 and was destroyed by fire in 1897. Mt McGregor is the site of Grant Cottage where General U.S. Grant spent his last days and died in 1885.